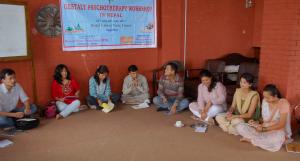 15 participants took part in this 1st workshop: counsellors, social workers and psychologists working in centres for support of children who are sexually abused, street children, victims of torture, refugees and young people with other traumatic experiences from the civil war period (until 2006).

‘We first  made an inventory of  the topics in their work and explored possible cultural differences. It was important to us that we could build up an idea about the situation of mental healthcare in Nepal.

During the introduction we actually worked around the polarity surviving versus quality of life. In relation to this basic topic we encountered sub-topics like: awareness, phenomenology, contact and especially styles of contacting in relation to culture. 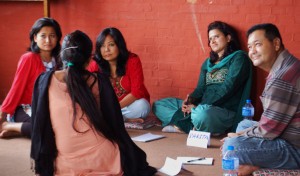 Furthermore we gave an introduction on some of the basic principles of the Gestalt theory and methodology. We have used those two days as an intake for the four year Gestalt training program.

Most of the counsellors who were in the workshop and will take part in the training work with children and it is shocking to realize that in a country like Nepal, so many children are suffering from severe Post Traumatic Stress Disorder and so many children are already in a very young age totally addicted to glue sniffing or other drugs as a way to escape from their unbearable reality.

At one hand we as trainers were deeply shocked by what we have seen and heard about the typical problems and the menthal healthcare situation in this country and on the other hand, deeply impressed and touched by the high degree of motivation and professionalism, the participants showed.

A few examples:
One of the counsellors spoke of the large group of street children in the age of just 6 years old who are already severely addicted to ‘glue-sniffling’.

Another counsellor reported a case of a little girl who had been sold by her uncle and  imprisoned in a dark room for several years while being sexually abused by many men. After being relieved from this terrible situation she was brought home to her village. However, in her village, she was seen as a ‘dirty prostitute’ and was raped and beaten again, but now by the local villagers many times. Also her family was abandoned from the village because of the shame this girl brought on the community.

A few counsellors are working in a centre for victims of torture and reported severe cases of torture during civil war period.

At the end, we were very motivated as teachers and psychotherapists to bring Gestalt alive in Nepal as a contribution of the social situation.’ 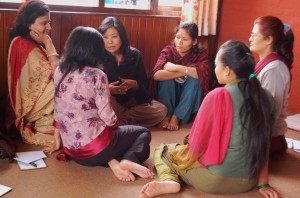 After the workshop we also had meetings with representatives of e.g. NGO’s, Child protection centres, mental hospitals etc. They all confirmed the severe situation on healthcare in Nepal. Another special group of clients that was mentioned by a Dutch representative of a Transcultural Centre for Psychosocial care (TPO) is the group of refugees living in Nepal. Some of them come from countries like Somalia, Afghanistan, etc. They were victims of betrayal: they paid a lot of money to be transported to countries like the UK or US, but were dropped somewhere in Nepal and lost all their money and goods. Many of them suffer from depression and have suicidal tendencies. Other refugees come from Bhutan and also among them, the rate of suicide is very high.

It was clear how big the need is for care for these caretakers. One of the first ways how we can do this, is by taking them and their situation very serious and being humble in the idea that we can ‘help’ them.

And another way how we can do this, is by providing a very profound, professional training program, which meets their needs and competencies.

We think that the Gestalt approach can offer this because of its roots in existential philosophy and because it is very focused on and experienced in supporting clients in dealing with the hard and painful facts of life, like suffering and death. 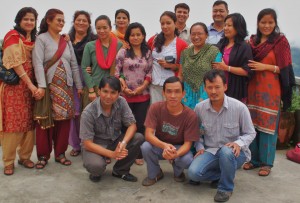 Copyright 2021· All rights are reserved to Gestalt in Nepal.